Ambon in the rain

Our trip to Ambon was fairly uneventful, catching no fish again but managing to hook up a floating fishing platform in the dark.
We were greeted by friendly locals, who pointed us in the right direction.

The night of our arrival was a cultural performance put on for the rally boats where cups of tea were served in typical Muslim tradition. My favourite.

We decided that despite the wet season and continuous rain we better check out the sites. The guys off Finale and Aria decided to also come along so we contracted the services of a guide and charted a mini van.
Apparently the beach was the first stop.

We then traveled to the hot springs. After sending in Bruce as our Guinea Pig, the braver ones of our party went in.

By this stage an appetite had formed, so we were taken to the port for lunch before going to see the sacred Eels.

After stopping at the markets for some partridge eggs and local produce, we jump started the van in peak hour traffic.

We finished our day with the war memorial . Thanks Abha and Angel for a fantastic tour of Ambon! 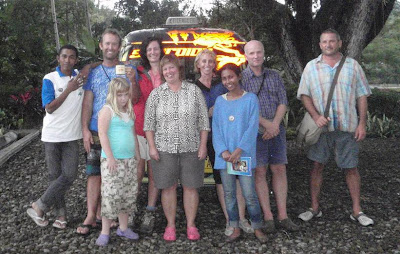 Our last evening in Ambon was marked (permanently) by a scuffle. Thyme and the wharf had a fight with the wharf coming off second best. Let's get out of here and find some sunshine!

If you guys have a phone number we can call you on then TXT it to us and we will call ???? C+J DTV

Hi Amanda,
Woow!!! Congrats! Thyme was able to make it to Ambom, well there's no doubt about that! My first time to visit your site, and it was a lot of fun! Hope to catch up with you when you get back to Darwin

You guys are living the dream! Well my dream anyway. Do you have dates that you may be in SIN or Phuket? I may be able to drop by if in town. Would love to hear some more of your stories. Mark B